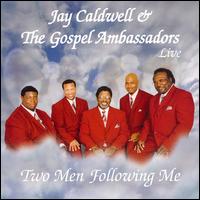 There are gospel quartet groups that have been around for a very long time and just seem to be in the shadow of the national recording artist. Then you pick up a project by one of these groups and realize that the group is in deed a national recording artist, although you may seldom hear about them and have rarely seen them on the major gospel quartet programs. Well, Jay Caldwell and The Gospel Ambassadors is one of those groups. The Gospel Ambassadors have been together over forty (40) years. The group has recorded at least twelve (12) albums. They have also recorded several videos. They are on the independent gospel label Road To Glory Records. Deacon Shumpert Watts Jr. heads this label.

Therefore, this month we review the new CD by Jay Caldwell and The Gospel Ambassadors titled Live – Two Men Following Me. Before getting into the CD, here is a little more about the group. According to the group’s website, “Jay began his singing ministry at the age of five singing with his church choir.” After moving from North Carolina to Delaware Jay met Reuben (Doc) Henry Jr. and together they formed The Gospel Ambassadors. The current members of the group are Jay Caldwell, Lonnie “Butter” Jamison, Gabby Ledbetter, Keith Yancey, Minister Otis Willimas, James Griffin, Bill Gatewood, Lamonte Murphy., and Curtis Clack. Jay, Lonnie and Gabby are the lead singers.

There are sixteen (16) songs on this live recording. The recording took place at The Baby Grand Theater, Wilmington, Delaware. This CD is full of nothing but traditional gospel quartet music. It begins with a powerful introduction by the emcee, George Witcher. From there the group moves into a great ballad, “Holy, Holy, Holy.” The next track, “Put Away Childish Things,” has that ‘down home’ feel to it. You will find yourself rocking from side to side. This song also represents the introduction of the smooth harmony of the background singers. The background harmony just gets better with each song thereafter.

You will recognize that many of the songs on this project have been previously recorded by the group. So, you get to hear many of the favorite songs from this group in a live setting. The one track that will really get your attention is a song that has become the signature song for this group – “Walk In Jerusalem.” This live version is outstanding. The background harmony is very tight and smooth. The guys seem to be enjoying themselves while singing this song. Another song of note is the much recorded “What A Friend.” The Gospel Ambassadors’ version of this song is one of the best. It is not a stretch to state that we have not heard such a moving version of this song since it was recorded by Doc McKenzie and The Hi-Lites. The background singers take the song to another level. This is a song that you will find yourself playing over and over.

“I’ve Got Something” would probably be considered the drive song on this project. It is not a hard drive, but more of an upbeat tempo song. It will probably not get much radio airplay, since it is over eight (8) minutes in length. You may find yourself comparing this song to several recorded by Slim and The Supreme Angels.

There is a monologue at the beginning of each song. There is much encouragement from the group for the audience to join them in this praise and worship service. And, from time to time, you do hear from the audience.

Overall, this is a great traditional gospel quartet recording. The musicians are superb. The vocals are outstanding and more importantly, there is a message (for someone) in each song. Put the CD in your player and let The Gospel Ambassadors minister to you. 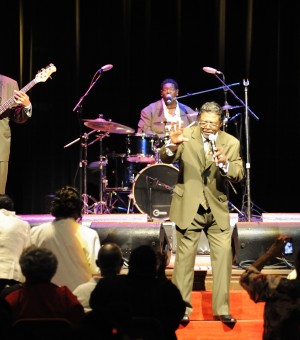 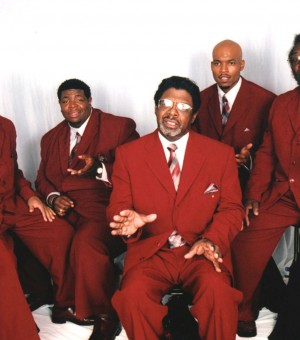 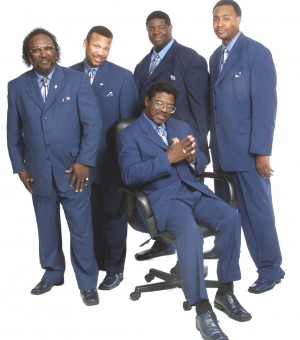 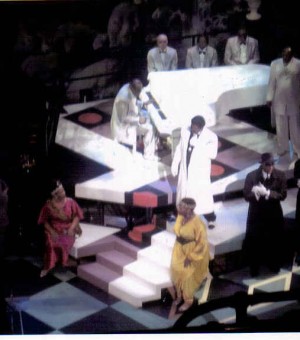 On Saturday I came out with my family to be a part of a service I knew would be blessed. I think back to the first time I ever heard your group I believe you were in concert with Maggie Ingram and the Ingramette’s. You sang, Take off your shoes Moses, and the church went END_OF_DOCUMENT_TOKEN_TO_BE_REPLACED

Blessings , I enjoy your ministry in song, one of my favorites is” ONE DAY AT A TIME” Literally, I love the integrity of this Group!! To God be the Glory as He continues to enlarge your territories, favor and traveling mercies. Keep Spreading “THE GOOD NEWS” in A World that has fallen ” In END_OF_DOCUMENT_TOKEN_TO_BE_REPLACED

Peace be unto you Bro Jay and The Gospel Ambassadors. I had the opportunity to witness another blessed service with you on last Saturday. It goes without saying I always look forward to hearing you when you are in my neck of the woods, and in between these times I listen to your CD’s as END_OF_DOCUMENT_TOKEN_TO_BE_REPLACED

My family and I came to see y\\\’all in seaford De on the 8th of this month. All I can say is what a blessing! I was a little down about some things, and I left pumped up and happy! Y\\\’all do an amazing job! I have found my favorite quartet group! We came for END_OF_DOCUMENT_TOKEN_TO_BE_REPLACED

I now live in Wilmington, DE but I am originally from the Eastern Shore of Virginia (Accomack County) and remember seeing the Gospel Ambassadors when I was a very young child. They impressed me then but after maturing and understanding the songs of Zion they sing about, have found them to be an inspiration. No END_OF_DOCUMENT_TOKEN_TO_BE_REPLACED

Blessings be unto you and yours. I have enjoyed your ministry for many, many, many years-I remember my dad (Louis Dicks) gave me my first cassette of Jay Caldwell and The Gospel Ambassadors. I fell in love …especially the song, “Holy, Holy, Holy”; love your rendition . I am visiting today to find out your END_OF_DOCUMENT_TOKEN_TO_BE_REPLACED

My family and I came to see y’all on the 8th in seaford de. Let me tell you I now have a favorite quartet!! If I must say my favorites is Lamont and Butter….but I love all of you the same!! We had a wonderful time being able to mee and talk with y’all!! I’m END_OF_DOCUMENT_TOKEN_TO_BE_REPLACED

Jay, I was very happy that you were still singing. I would go and see your group whenever “Gun” would sign your up. My Mother and her boyfriend died. They too enjoyed your singing. Please let me know when you are in Washington, D.C. and/or in St. Mary’s County. I really miss some good singing END_OF_DOCUMENT_TOKEN_TO_BE_REPLACED

In the year 2013 I had a stroke,. I wanted to give up and throw in the towel. But when I heard your song never let go , I said to myself , I CAN DO THIS!! To God be the glory three years later at the age of 30 , I’m doing extremely well. END_OF_DOCUMENT_TOKEN_TO_BE_REPLACED

What an awesome experience to be able to sing on the same platform as the Might Jay Caldwell. I grew up listing to Jay, by way of my late mom. She would have that good gospel music playing on Sunday Mornings while getting ready for church. With Evangelist Serena Ford and the Praise Team , END_OF_DOCUMENT_TOKEN_TO_BE_REPLACED

Just stopping in to let you know that you are truly a Blessing to me. I Enjoy your Music everyday, and I am thankful for our friendship. John and I are BLESSED to have you all in our lives! Keep up the great works! Merry Christmas and a BLESSED, PROSPEROUS NEW YEAR! See you soon! END_OF_DOCUMENT_TOKEN_TO_BE_REPLACED

Its Gerald Jones . I used to play Keyboards for Spencer Taylor and the QCs when Phil Lum was playing guitar for us . Also played for the Gospel Heavyweights and Brooklyn Allstars . I sat in quite a few times with you especially when you were in my Hometown Amityville , Long Island or END_OF_DOCUMENT_TOKEN_TO_BE_REPLACED